Has anyone ever heard of Cinnamon Chips before? I have not so this discovery is revolutionary! This cookie combines cinnamon chips and one of the most underused spices in baking (in my opinion), Cardamom. The combination of the two adds new flavor and depth to the normal snickerdoodle cookie dough recipe. Cardomom adds an additional spicy component and accentuates cinnamon when used. Is there a baking chip you have found that was amazing to you? 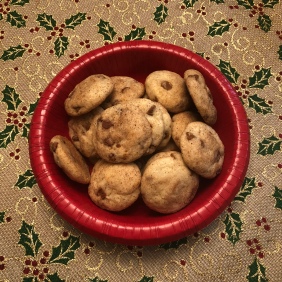 This recipe was picked mainly because of the unique use of Cinnamon Chips. We had a back up recipe in case we could not find the chips at a store near us, but luckily we did. If you aren’t able to find them at a local store, I saw that they can be bought on Amazon. The recipe was found in Taste of Home Magazine’s Christmas Cookie Edition. This was an elevated snickerdoodle recipe and was one of the stand out favorites so far in our family this year.

These do require chill time of about 1 hour!

Mix the ingredients of the spiced sugar together in a small bowl, set aside.

Cream butter, sugar, and 2 Tbsp. of the spiced sugar until light and fluffy.

Beat in the eggs and vanilla extract.

In a large bowl, whisk together flour, cream of tartar, baking soda, and salt. Gradually add to the creamed mixture, mix well. Fold in the cinnamon baking chips.

Cover and refrigerate for about 1 hour.

Preheat the oven to 350 degrees Fahrenheit.

Shape the dough into 1 inch balls, roll in spiced sugar mixture and place onto parchment lined baking sheets 2 inches apart. Bake for 11-13 minutes, or until set.